We can talk on and on about how we ought to respond to our chronically sick Loved Ones.

We can outline what the Right Thing to do is, or make lists of What Not To Do.

But in the end, if we claim Jesus as our Saviour and role model, the only thing that really matters is how He responded.

Being a Christian is copying Jesus.

But Jesus is impossible to copy!

When we think about Jesus’ response to the sick, we think immediately of his miraculous healings – and then we give up.

In case you haven’t realised … we can’t heal.

Of course we can implement medicine or relief strategies, but we can’t wave our hands and miraculously banish sickness.

Jesus could. He could heal. In a superhuman, supernatural way. On earth, even though He was man, He was also God.

This immediately sets Him apart from us.

We can’t really copy Him in this. In our own strength we cannot heal. But let’s not dismiss the whole of His response, simply because we cannot implement part of it.

Many of us may have read the recount of Lazarus. It’s become famous – so much so, that the term “Lazarus” has become part of our popular culture.

Yet it’s apparently one of the  most painful experiences for Jesus recorded in the gospels.

Jesus’ earthly life was tied up with Lazarus.

Lazarus was his friend, and so were Lazarus’ sisters, Mary and Martha. This passage tells us that Jesus loved Lazarus.

And yet, He, with all the powers of heaven and earth at his command, does not heal him. He lets Lazarus die a slow and painful death. He allows Mary and Martha’s hearts to break with grief.

Jesus knew what He was doing.

He wasn’t helpless. He could have healed Lazarus, but instead He let him suffer.

Because there was a greater purpose. There was something more important than an earthly healing.

“This sickness will not end in death. No, it is for God’s glory so that God’s Son may be glorified through it.”  (vs. 4)

Then Jesus said, “Did I not tell you that if you believe, you will see the glory of God?” (vs 40)

Jesus could have healed Lazarus before his suffering and death, and yet he chose to heal him only afterwards. He could have prevented suffering, but he did not, because He had a better plan. One which would somehow, better display the character of God.

This sounds like a cold-hearted response. A calculated one.

It raises a common complaint. Does God actually care? Or is He just using our suffering?

My friends, there’s no “just” about it. Because in this passage we do see the character of God far clearer than if Jesus had healed his friend immediately.

We see both God’s power (in Lazarus’ resurrection), and His tenderness (in Jesus’ tears).

We are told that Jesus was “deeply moved in spirit” and troubled, and “wept” to the extent that those watching exclaimed, “see how He loved him!” Although physical healing was not Jesus’ main goal, it was not unimportant.

Jesus felt, and He felt deeply.

This was His response – and it is one we can follow.

As he went along, he saw a man blind from birth. His disciples asked him, “Rabbi, who sinned, this man or his parents, that he was born blind?”
“Neither this man nor his parents sinned,” said Jesus, “but this happened so that the works of God might be displayed in him. As long as it is day, we must do the works of him who sent me. Night is coming, when no one can work. While I am in the world, I am the light of the world.”
After saying this, he spit on the ground, made some mud with the saliva, and put it on the man’s eyes. “Go,” he told him, “wash in the Pool of Siloam” (this word means “Sent”). So the man went and washed, and came home seeing.

This passage shows that healing is a “work of God”. It is part of God’s nature. It shows us what He is like, what sort of god He is. He saves and fixes.

This is important, because it means illness is not good in itself. It may be a means but it is never an end. Suffering by itself does not point us to God. It has no inherent value or holiness, apart from Him.

This passage also reveals that the work of healing is temporary. God will neither be healing nor saving for all eternity. Jesus says that soon “night is coming” where no one can work. Once Jesus returns, there will be no need for physical healing or relief.

When God comes and saves spiritually, once and for all, physical sickness will also be made obsolete.

Jesus healed because He is a healing God, but He did so in the knowledge that healing on this earth is only part of the answer. It is a fixing of the symptoms rather than the disease.

I think this is helpful for us to remember.

“Jesus went through all the towns and villages, teaching in their synagogues, proclaiming the good news of the kingdom and healing every disease and sickness.

When he saw the crowds, he had compassion on them, because they were harassed and helpless, like sheep without a shepherd.”

The gospels are full of accounts of Jesus healing sick people.

Prior to this verse Jesus healed a paralysed man, a sick woman, and some blind, mute, dead and demon-possessed beggars.

Yet because He was fully human as well as fully God, He could not physically heal everyone.

Jesus saw suffering and sickness more than we ever will, because He understood everything about these people. There are some pains, some fears, some sufferings of our Loved Ones that we can never know.

Yet He knew them all.

Even more importantly, He understood their spiritual suffering and lost-ness.

Jesus could have looked away. It would have been easier.

After all, He had his own death coming up, His own suffering.

Seeing their pain caused Him pain – yet He refused to look away, refused not to feel.

He was not afraid to talk about sickness or suffering, to think about it.
Jesus allowed Himself to empathise, even when it would have been easier not to.

Are we willing to do likewise?

“He took Peter, James and John along with him, and he began to be deeply distressed and troubled. “My soul is overwhelmed with sorrow to the point of death,” he said to them. “Stay here and keep watch.”” (vs 33, 34)

Here Jesus does what we never can.

We can weep, bring relief (to an extent), we can empathise. But we cannot take someone else’s pain upon ourselves. We can only ever Watch.

Yet Jesus was (and is) a participant.

In Gethsemane, Jesus is the one who is sick. He is the sufferer. He is the one crying out to God for relief. He was wracked in anguish so that one day all physical and spiritual sickness will be healed.

In doing do, Jesus acknowledges that grief and pain is something which hurts.

Interestingly, He also asks His friends to watch. He is not afraid to invite them into His suffering or ask them for help. He could have requested they pray somewhere else and leave Him to suffer in private, but instead He asks them to stay nearby.

He does not ask them for answers, or demand they alleviate His pain. He simply desires their presence.

Then he returned to his disciples and found them sleeping. “Simon,” he said to Peter, “are you asleep? Couldn’t you keep watch for one hour? Watch and pray so that you will not fall into temptation. The spirit is willing, but the flesh is weak.”

He does not become angry or bitter when they fail Him. He is patient and desires their good even now. He desires their presence, yet He is not looking to them for relief but to God.

I don’t think it is extrapolating to say that Jesus chose to suffer in community.

Thus in Gethsemane, He sanctified the experiences both of us who suffer, and us who Watch. Suffering was not beneath Him, neither was asking for Watchers.

When we suffer or when we Watch, do we do so knowing we tread a path our Saviour has trod?

How then do we respond?

I do not think we will go wrong if we respond like Jesus.

If we weep with those who suffer, unafraid of sadness.

If we seek to alleviate pain because there is nothing good about sickness, yet do so knowing that healing is only temporary and therefore is never an end in itself.

If we open our lives time and time again to those who hurt, and strive to cultivate a heart which feels and cares.

If we Watch and we suffer. Partly because we have no choice, but absolutely because our Saviour has dignified both experiences by participating in them.

And lastly, because Jesus is God, our response must be fortified by a solid hope. After all, we can never copy Jesus perfectly – and so we must cling hold of the reality that in the end it is His response, not ours that matters.

It is His response that has saved us, and will one day save the world:

“Since then the children have flesh and blood, he too shared in their humanity so that by his death he might destroy him who holds the power of death… for this reason he had to be made like his brothers in every way.”

//Are you encouraged or disheartened by Jesus’ response? Do you want to respond like Him? What do you find the most difficult? 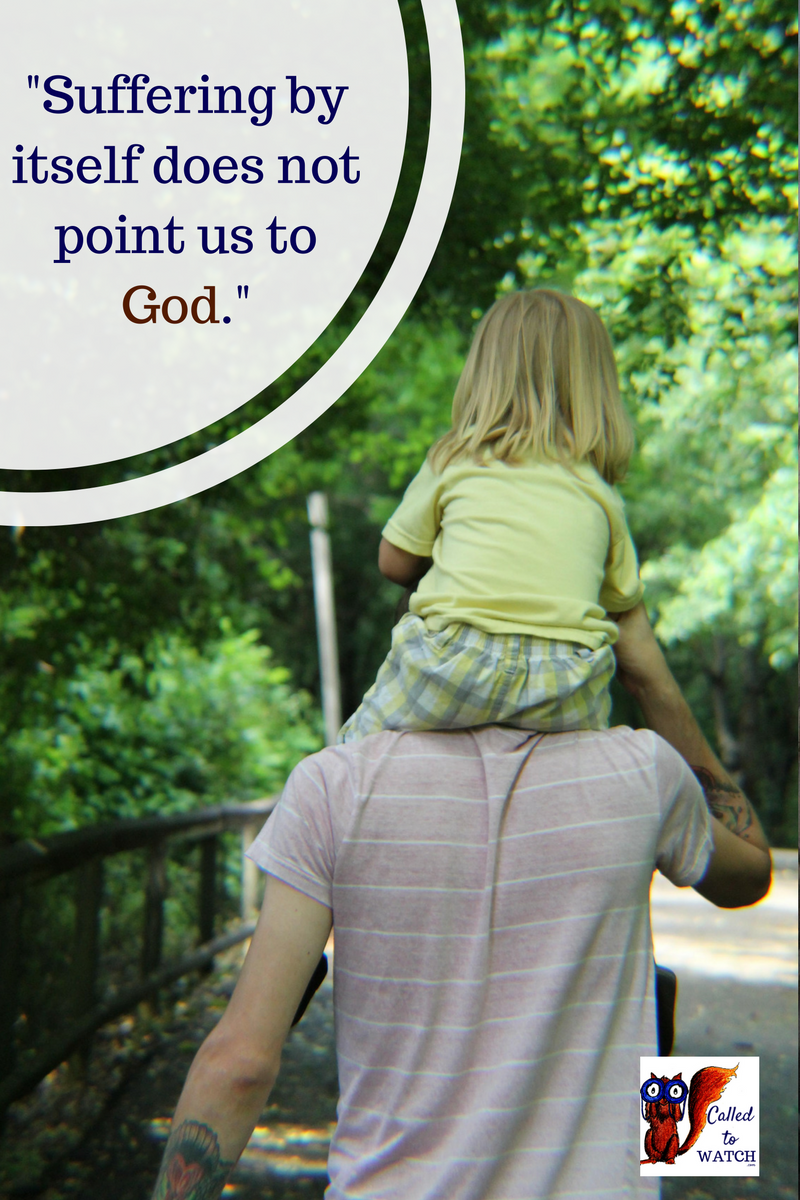