Some things in life are opposites. They can’t coexist because they cancel each other out. Fire & Water. Tiny & Huge.

Sometimes I am tempted to add ‘Sickness & Christianity’ to this list. 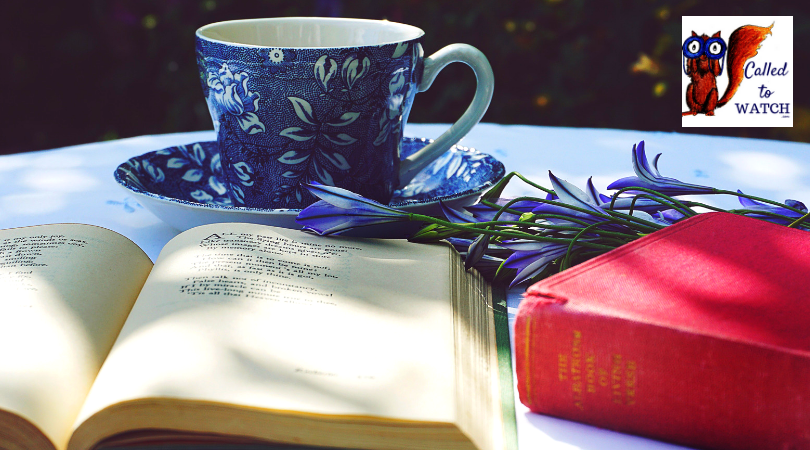 Some people will state it blatantly: there can’t be a god, because if there was, there wouldn’t be suffering.

Ie. If God existed, sickness would not.

Others may not state it that way, but they will believe it just the same. The topic makes them uncomfortable, and they don’t want to talk about it.

They’re afraid to look into it too deeply, because they know sickness is a reality, and they want God to be a reality too, to make them feel better about life. They want to keep their crutch.

Christians, of course, believe in Christianity. They stake their lives on it. And yet… they have to believe in sickness as well. They would be fools not to.

We, as Christian Watchers, know only too well that sickness exists – yet we claim God does too.

Chronic Illness and the Bible

This is the beginning of a series of reflections on sickness and Christianity. About where they intercept, and how they change each other. I firmly believe that actually they are not polar opposites. But we can’t stop there.

After all, their co-existence, rather than solving the problem, creates a whole bunch of new ones!

Why doesn’t God take away illness?
Does all suffering have a God-given purpose?
Does God answer prayer?

I’m not going to pretend I have the answers. I don’t. I’ve asked these questions, and I’m seeking the answers just as earnestly and as painfully as you. Yet they’re important questions, and part of Watching is having our eyes wide open (we can hardly watch with them closed!) so we must ask them.

Come join me on the journey! May we seek the Truth together.

The Bible is silent

First of all, since the Bible is the revealed Word of God, we must turn to it. Not as a text on which we can impose our own desires and interpretations, but as a holy book from which we must humbly learn – setting aside our prejudices.

So then. What does the Bible say about sickness?

Well… to my surprise I discovered it didn’t say very much! With the aid of a concordance, I looked up every reference I could find (you can find the full list in Resources), and organised what I found in the following groups:

The first mentions of sickness in the Bible is associated with sin. In Exodus and other early books it is linked to specific instances of rebellion. In Deuteronomy it is listed as one of the many consequences of the Israelites breaking their sacred covenant with God.

This is confirmed in Jeremiah and many of the later prophets, where sickness (physical as well as spiritual) is lamented as a result of sin.

There is a repeating promise that when God’s Kingdom comes, there will be no sickness (Isaiah 33:24), and God’s Shepherd will care for the sick.

It is not out of place then, that a woman is described as being “sick” with her period, a reminder that this was God’s curse after the Fall.

Sickness is also used as a way of deception, for men to acquire the desires of their hearts. Ammon feigns sickness so as to get the chance to be alone with his sister, and David’s wife Michal pretends he is sick in bed to protect him.

This is the only disease that is mentioned by name repeatedly in the Old Testament. At that time it appears to have been a chronic disease whose sufferers held little hope of a cure.

On several occasions it is the direct result of the judgement of God. A few notable sufferers include:

The Old Testament describes other diseases without naming them. Sometimes they are clearly recounted in order to display God’s power in that situation.

Other times they appear to be simply mentioned as making up a natural part of life.

In several of the wisdom books we receive some more general allusions to sickness:

In the New Testament Jesus is seen as the one who heals sickness, thus reversing the effects of sin. This seems to point towards His ultimate task of freeing the world from sin, and cleansing the hearts of men. Jesus is linked to sickness in two ways.

He heals those affected by it – Simon’s mother-in-law, the crowd, the centurion’s servant, the royal official’s servant, the bleeding woman and Lazarus. He also appoints his disciples to heal those who are ill, first when he sends forth the twelve, and again at the Great Commission. His healings both allude to and surpass the earlier miraculous healings of the Old Testament prophets.

He himself bears it – We see in Isaiah and Mathew that Jesus himself carried the diseases he healed. His own suffering and ultimately His death frees us from sin and its effects.

This theme continues after His ascension when Peter heals Dorcus, and Paul (and handkerchiefs that touch him) heals Publius’ father and many others. Healing in these cases appears to demonstrate special out-pourings of the Spirit in specific situations, just as it did in the Old Testament.

Unlike Jesus, Elijah could not heal every sick person and neither could Paul.

The most obvious example of this is when his fellow worker Epaphroditus falls sick and almost dies. He is eventually healed by the mercy of God, but not in a miraculous manner, and not by Paul. So too, Trophimus falls sick and there is no mention of healing.

In Paul’s letters it is interesting to note that sickness is once more linked to sin. In 2 Corinthians Paul links a misuse of the Lord’s supper to sickness, whether physical or spiritual, and this connection also seems to appear in James, when the elders are called to pray over the man who is sick, and he is called to repent of his sins. 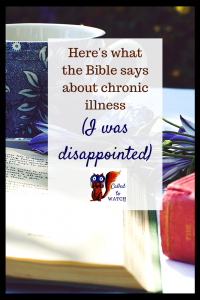 Are you disappointed by the Biblical references to sickness?

The above represents the total mentions of sickness within the Bible. Are you disappointed? I was, a bit.

I guess I expected that something which has impacted my life and the life of those I loved ought to have prime position in God’s Word.

Most of the Biblical sickness situations hardly seem transferable to my own life.

Indeed, aside from leprosy, there is little to no mention of chronic illness at all! Does this mean the Bible is inapplicable to the circumstances of my days?

The Bible teaches us some specific truths:

2. Sickness and suffering are natural parts of life on this earth

3. God alone heals, either directly in the form of miracles, or indirectly as in the case of Epaphroditus

4. Jesus himself took on our humanity, abolished sin in his death, and by his earthly ministry gave us a taste of the nature of His future kingdom: one day there will be no more sickness

What use are these truths?

Perhaps these truths, ‘general’ as they may be, are just as helpful (or more so) than a specific ‘manual on dealing with chronic illness as Christians’.

For one, it forces me to think for myself, to grapple with these things seriously and not just accept words blindly. It forces me to turn to Jesus and rely on Him. After all, they say that if you figure out the answer yourself it will stay with you longer than if you are merely preached at. 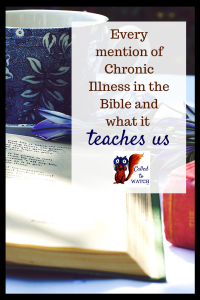 On hearing this, Jesus said to them, “It is not the healthy who need a doctor, but the sick. I have not come to call the righteous, but sinners.”
Mark 2:17

We are all sick. Desperately sick. Sick and rotten and dying all the way through. We are spiritually ill and we need help. None of us are healthy, none of us are well.

Some of us are also physically sick, and to them we are called to respond as Jesus responded to us.

“Then the King will say to those on his right, ‘Come, you who are blessed by my Father; take your inheritance, the kingdom prepared for you since the creation of the world. For I was hungry and you gave me something to eat, I was thirsty and you gave me something to drink, I was a stranger and you invited me in, I needed clothes and you clothed me, I was sick and you looked after me, I was in prison and you came to visit me.’
“Then the righteous will answer him, ‘Lord, when did we see you hungry and feed you, or thirsty and give you something to drink?  When did we see you a stranger and invite you in, or needing clothes and clothe you?  When did we see you sick or in prison and go to visit you?’
“The King will reply, ‘Truly I tell you, whatever you did for one of the least of these brothers and sisters of mine, you did for me.’”
Mathew 25:34-40

Let us continue to ponder these things together.

// Would you prefer it if the Bible talked more about sickness? Is what it does say sufficient for you? Why/why not?

Don’t be a silent reader – share your thoughts below!

4 thoughts on “Sickness and the Bible (references, disappointments and questions)”